You may have heard the familiar tap, tap of a telegraph machine in a movie. But have you ever listened to or created Morse code yourself? April 27th is Morse Code Day, so this would be a great time to learn a little bit about inventor Samuel Morse and the telegraph! Explore this day with the family with these activities designed for a range of ages. 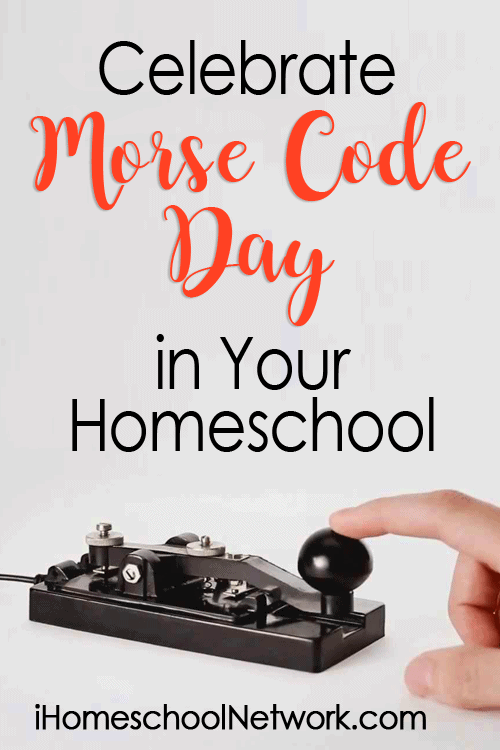 Explore the world of Morse code, learning more about its development and how it was used throughout its history.

Now that you know a little about Morse code and how it works, explore further by engaging in some of these projects or design ideas!

Think Morse Code is a “dead language”? Think again! Even though the need for Morse code was decreased by the development of radio and telephone technology, Morse code continued to be of use. Older students might be interested in learning about ways in which Morse code is still being used to communicate, especially to communicate secretly! This is interesting because Morse code and telegraph communication were not originally designed to facilitate secrecy! (Note: Some of these examples occur in hostage situations, so content may be too intense for younger students.)

Lynna Sutherland is a homeschool mother of eight and a certified parenting coach. She writes at Homeschooling without Training Wheels and hosts the Sibling Relationship Lab podcast and website. Lynna loves to encourage moms in the flexibility of homeschooling and the freedom of the gospel!

END_OF_DOCUMENT_TOKEN_TO_BE_REPLACED

I received compensation in exchange for my time and review of Big River Academy homeschool curriculum. All opinions are my own. I’ve always been a hands-on curriculum kind of homeschooling mom. We’ve grown butterflies for science, visited museums for history, and drawn comics as creative writing. I usually expand on book-based curriculum with my own END_OF_DOCUMENT_TOKEN_TO_BE_REPLACED

END_OF_DOCUMENT_TOKEN_TO_BE_REPLACED

Lynna Sutherland is a homeschool mother of eight and a certified parenting coach. She writes at Homeschooling without Training Wheels and hosts the Sibling Relationship Lab podcast and website. Lynna loves to encourage moms in the flexibility of homeschooling and the freedom of the gospel!