10 Books to Inspire Compassion and Empathy in Homeschooled Tweens

In this me-first society, it’s no wonder that 3.2 million kids are bullied each year. American narcism has helped to create a generation of cynical tweens and teens who lack empathy and compassion and who find it all too easy to tear others down instead of building them up. One way to widen an older child’s world, minimize a me-first mindset, and help him realize that there is something bigger than himself is by providing him with compassion-themed middle-grade fiction books. Great books, especially middle-grade titles that contain complex characters and themes, can enlarge a child’s vision and give him a glimpse into the life of a someone who is different from him—their culture and life circumstances. Fear is removed from that culture or circumstances because knowledge is gained. A well-read child can impact the word because he has a frame of reference for the world and all the people in it. 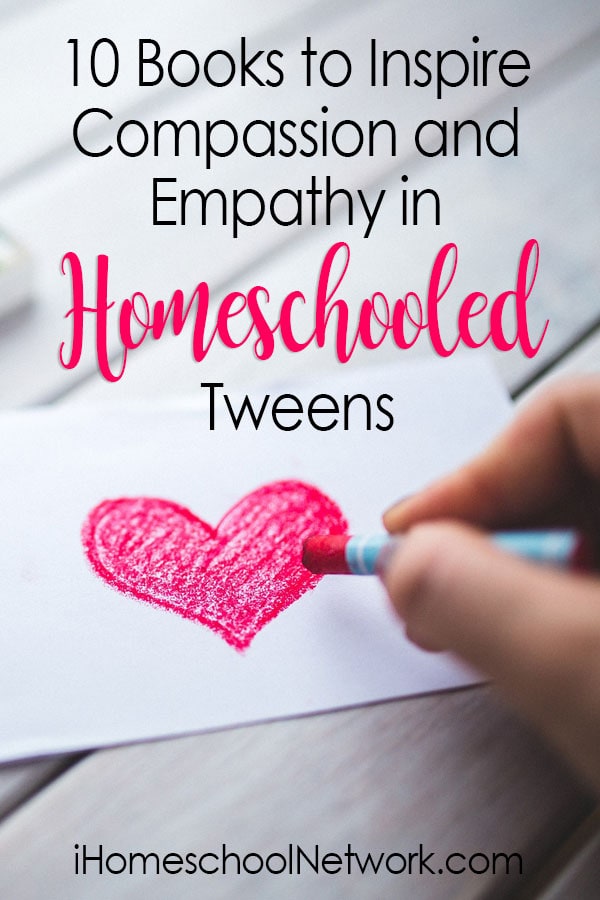 In a story, truth sneaks up on a child and teaches him about character and life. The plot doesn’t have to preachy or naggy. It affects a reader indirectly rather than being overly explained. The best books are ones that touch on some heavy themes in an age-appropriate way, allowing a tween to feel the weight of hardships without being crushed by them.

I’ve gathered a list of ten books that do just that—books that show the compassion and empathy of humanity through well-developed characters and plots. Although most of these can be read aloud to younger children, the complex themes make them most suitable as read alones for ages 8-12.

10 Books to Inspire Compassion and Empathy

A Long Walk to Water by Linda Sue Park

Based on a true story, this book details the lives of two Sudanese children living at different times in history but experiencing the same ravages of civil war and impoverished communities. In a surprising twist, the lives of the two children collide in an act of mercy and compassion that ends up having a ripple effect on an entire nation.

The lives of three children scattered in various corners of the world are woven together by the common theme of social injustice and racial prejudice. Set against the backdrop of World War I, this story shows the resilience of children and their ability to forgive and rise strong. While the book is great, the orchestral additions and fantastic narrations of the audiobook version make it even better.

After a freak firecracker accident that causes him to go blind, a young bully must learn how to function without sight. His pride begins to hinder him as he’s faced with the same kind of harsh treatment from others that he used to dole out to them. Then one day, he’s introduced to a seeing-eye dog and his attitude about life, friendship, and blindness begins to change.

Number the Stars by Lois Lowry

When German troops march in to Denmark determined to “relocate” all the Jews, 10-year-old Annemarie and her family bravely risk their own personal freedom to help a rag-tag band of Jews find safety across the sea into Sweden. Based on the true story of the Danish resistance of WWII, this is a book of survival that reveals the true-life heroism of an entire country in the midst of unimaginable hardships.

In a desperate attempt to protect his little blind sister Kinza from being sold to a beggar, Hamid takes her and flees to a mountain village in North Africa. While there, he meets a missionary who gladly opens her heart and home to helpless street children. Hamid must swallow his pride and learn to accept the love she freely offers.

Hate seeks to consume a young Daniel bar Jamin. He wants nothing more than to avenge his father’s death by punishing every Roman he meets. But after one life-changing encounter with a carpenter named Jesus, Daniel’s emotional scars of bitterness begin to heal. He learns that hate never overcomes hate—only love can do that.

The Cay by Theodore Taylor

Despite his mother’s long-time warnings that people of color are “different,” young Phillip must put his generational prejudice aside and humbly accept the help and companionship of an old West Indian man after they are both tragically shipwrecked on an island. Phillip who sustained a severe head injury that took his sight, learns to see past race and social standing.

The Miraculous Journey of Edward Tulane by Kate DiCamillo

This is the story of love lost and love regained. When a China rabbit grows arrogant and takes love for granted, he finds himself on the receiving end of a spell that will change his life forever. He’s cast out of the only home he’s ever known. Lost and alone, he sets out on a journey to rediscover gratitude and contentment.

The Ostrich and Other Lost Things by Beth Hautala

11-year-old Olivia Grant has reached an age when her older brother’s autism diagnosis begins to mean new things for her and her family. She struggles to find her place in this delicate sibling relationship. In her misguided effort to help him find “normal,” she learns a powerful lesson about unconditional love.

When a group of French school children and their head mistress, Sister Gabriel, are asked to hide ten Jewish refugees from the invading German troops during WWII, they volunteer with bravery. In the day-to-day struggles of keeping their secret hidden, the French children discover that they have more in common with their charges than they ever imagined. They all learn that joy, fear, friendship, and love are universal emotions.

Need more titles to help you nurture compassion and empathy?

Be sure to grab my Top 10 No-Twaddle Book Lists for Every Age from tots to tweens.

Ready to learn about the 50 states with your kids? There are many curriculums, unit studies, and books to guide you through the United States. This post contains affiliate links to products you might like. You may find those quickly get mundane, and your kids lose their focus, though. If you want to make geography END_OF_DOCUMENT_TOKEN_TO_BE_REPLACED