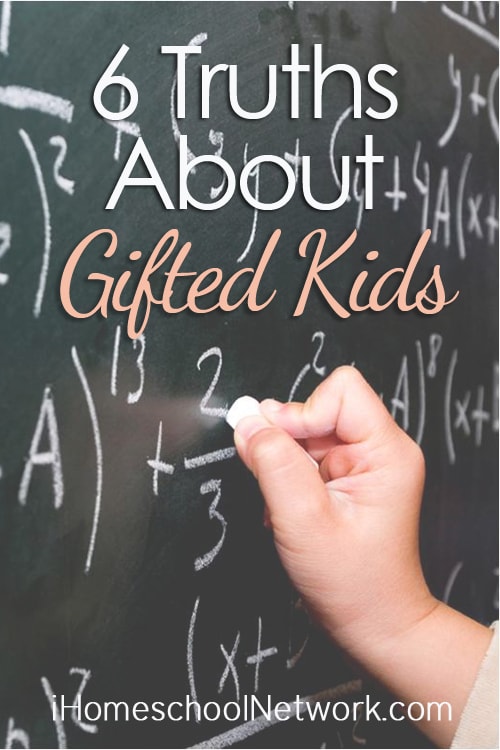 Yup, I just used the G-word. Did you cringe just now, when you read it? To be honest, I still cringe a little too.

As the mother of a profoundly gifted and twice-exceptional child, I think that gifted is a terrible label; it brings to mind images of beautifully-wrapped packages with neatly tied bows. Our gifted reality is sometimes beautiful but complicated and challenging and anything but neat.

When folks hear the word gifted, they tend to make assumptions, including:

Gifted kids are easy to parent.

Gifted families are lucky; they have it easier.

Parents of gifted kids push them to perform early and often. They hothouse.

Gifted education is unnecessary. They will do fine on their own.

This is not our gifted reality. Today, I would like to share some gifted truths with you.

1. Giftedness is better understood when you think of it in terms of asynchronous development.

When people hear the word gifted, they tend to imagine a start student who floats through school with straight-As and heaps of praise from teachers. They tend to confuse giftedness with achievement when the they are two entirely different things.

My favorite definition of giftedness is this one, from the Columbus Group, because it defines giftedness in terms of asynchronous development:

Giftedness is asynchronous development in which advanced cognitive abilities and heightened intensity combine to create inner experiences and awareness that are qualitatively different from the norm. This asynchrony increases with higher intellectual capacity. The uniqueness of the gifted renders them particularly vulnerable and requires modifications in parenting, teaching and counseling in order for them to develop optimally. (The Columbus Group, 1991).

The reality is, most gifted children are asynchronous. While the general population develops in a relatively uniform way, gifted learners demonstrate asynchronous development. And the more gifted the child, the more asynchronous that child may be. A 7-year-old gifted child appears to be his age physically, but she can have the intellect of someone twice her age with the emotional development of a toddler. Gifted children can be many ages at once, out of sync.

The existence of an afterlife

The sun burning out

The meaning of life

These are questions and fears that I have been navigating with my son since he was a toddler. Due to his asynchronous development, he houses thoughts in his busy little mind that his emotions are not yet able to process. He was unable to watch television until he was 6-years-old because he was so incredibly sensitive to its content and themes.

If you ask a gifted mother to describe her gifted child, one of the most common responses you’d receive would be this: Gifted children are intense! When my son is happy, he is bouncing off the walls, bursting with joy happy. When he is angry, he is a tornado full of boy. When he is sad, he dissolves into a mushy mess on the floor. When frustrated, he can throw a tantrum to rival that of any 2-year-old.

Gifted children are known for their overexcitabilities, a term used by Polish psychologist Kazimierz Dabrowski as part of his theory of personality development.  Dabrowski’s overexcitabilities have been embraced by the gifted community as they help to explain the extreme sensitivity and intensity that is common among this population. There are five areas of overexcitability: intellectual, sensual, emotional, imaginational, and psychomotor.

4. Gifted children can be learning disabled.

My son’s cognitive abilities are above the 99.9th percentile, but he is also learning disabled. He struggles with sensory processing disorder and meets criteria for an ADHD diagnosis. He also has BIG worries. My son is twice-exceptional: gifted and learning disabled, and he is not alone. There are so many twice-exceptional learners out there, all of whom struggle to have their unique needs met in traditional public school classrooms.

5. Gifted children need to be with intellectual peers.

Whenever the topic of intellectual peers comes up, I tell the story about the day I was leaving a restaurant with my children and some of their little friends. My son, who was 5-years-old at the time, stopped short and shouted, “Guys!! Look! Guys!! Doesn’t that latticework remind you of a portcullis? It’s beautiful!!” His friends, who had been goofing around, paused to look in the general vicinity of where he was gesturing, and then carried on with their play. My son remained, awestruck, admiring the restaurant’s garden. I quickly grabbed my phone and googled portcullis and he was right: the garden’s trellis did resemble a medieval castle’s portcullis. And then my heart did a little flip-flop because I wondered how his peers were going to understand him if his own mother had to Google his words. Gifted children need to be around people who understand and appreciate them. Those people may be two years older or ten, but it is wrong to assume that these kids are best placed with children with whom the only thing they have in common is their year of birth.

My son is a funny, smart, energetic, creative, intense, demanding, and utterly exhausting little human. I love him to the moon and back again, but parenting and educating him has been one of my life’s greatest challenges. He has taught me so much over the years and our journey has only just begun. Over time, our journey has become a bit easier thanks in large part to the gifted community that we have sought out and, in some cases, created. Just as gifted children need support and understanding in order to thrive, so too do their parents in order to travel on this path, otherwise it feels like a lonely venture most days. If you are the parent of a gifted or twice-exceptional child, know this: You are not alone.

Changing the face of giftedness

I know that the word gifted is an uncomfortable one, but when we don’t talk about this population, we do these kids a disservice. The more we talk about gifted and twice-exceptional learners and their unique educational and social-emotional needs, the more we can increase public understanding of this population. Gifted children are not better than their peers, they are different from their peers. Just as other populations that differ significantly from the norm need support, so too do gifted and twice-exceptional learners. I believe asynchronous development to be the very essence of giftedness. If folks could understand that one piece of giftedness, I believe the entire population would be better understood and supported, and our world would change for the better.

Are you the parent of a gifted or twice-exceptional child? Share a gifted truth here.