No More SATs? You May Wish To Wait Before You Celebrate 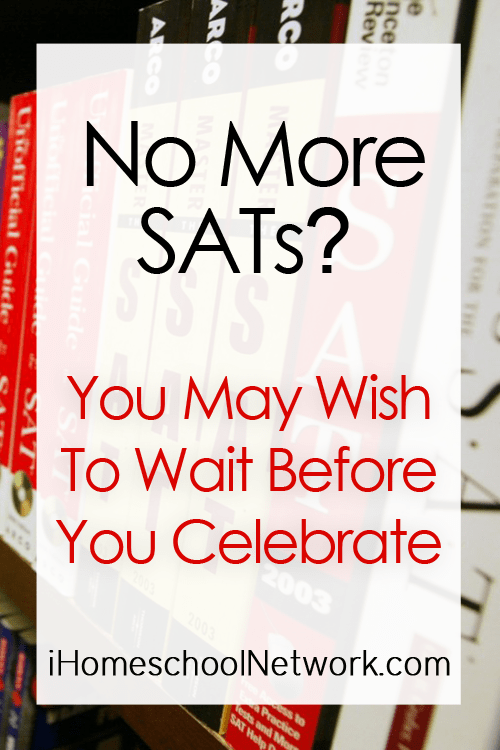 Word on the street, is that colleges will be eliminating or making the SAT or ACT optional for admission. However, before you break out the celebratory bubbly, keep in mind that both are accepted by every college and are not so different from one another as many suggest. Before getting too excited, let’s break down the facts that are not being discussed completely. Ultimately, knowledge of what these tests really measure and their significant role in the admissions process will make all the difference to parents and students alike.

For starters, students today are educated in several ways: public, private and homeschool environments. Needless to say, each school, each state and each home educated student learns a wide array of academics. Our great nation allows for diversity and independence when it comes to choosing individual academia which helps create independent thinkers and strong leaders. But, on the flipside, a student’s GPA is not necessarily a prediction of a student’s success in college since a 4.0 GPA at one school no longer holds the merit value it once used to. In fact, some schools or parents work with a 5.0 model. The discrepancy lies in many factors such as a wealthier area, prestigious or Title I school as well as many of the school politics that vary from district to district. Due to each public, private, or homeschool student following their specific guidelines in terms of grading and accomplishments, there is only one reasonable and impartial way to compare all students; a standardized test such as the SAT. It is the numerical, objective ingredient that is common to all students and levels the playing field.

Admission’s counselors are given the arduous task of sorting through numerous applicants who look similar on paper but come from all walks of life and backgrounds. Therefore, a better predictor of college-readiness than just a GPA and a rank since there are so many variables (such as only one-third of students graduating high school) is a great SAT score. It has a proven track record as one of the main indicators of a student’s success in college. Colleges can compare data by keeping record of students and their test scores. For example, an SAT score of 1300 this year can be compared to a student who scored the same four years ago. An ACT score of 33 from five years ago is still better than a score of 29 last year.

There are a few problems that opponents of standardized testing are not addressing. Mainly, they are:

What these tests really measure.

If a student’s GPA reigns supreme as the predictor of college success more than a student’s standardized test scores, it would be a much more difficult task to determine who will succeed due to the simple fact that: different schools and states teach a variety and intensity of subjects. If the course material content were identical from state to state and from public to homeschoolers, then a GPA would in fact even the playing field be the ultimate determining factor. Regrettably, that is not the case. Standardized tests put aside testing for content and are logic-based exams where questions are tricky with misleading information in which the incorrect answers look desirable if a student doesn’t read carefully with a critical eye. The same aptitude is measured on every test due to using the same recurring patterns. These exams test a student’s critical thinking skills which are necessary for success in college and beyond. Therefore, standardized tests offer a more concise judge of college readiness and success. It is narrowed down to learning how to take the test.

The real truth behind “test-optional” schools.

Although “test optional” sounds appealing, much of the information isn’t disclosed when touting the idea of abandoning an entrance exam. First of all, most of the schools listed are specialized schools. This option doesn’t apply to the majority of four-year universities when it comes to the application process. Next, in order to apply for scholarship money, the test scores are still a requirement for qualification. Lastly, upon inspection of the fine print, many of the schools still require some form of entrance exam to be submitted. Incredibly, a large portion of students who apply for “test-optional” schools still submit their scores during the application process.

The false information about the fairness of tests for lower socio-economic students.

The biggest argument for eradicating test scores for college entrance seems to be that there is an injustice for students who have lower socio-economic backgrounds and who either go to lower-quality schools or unable to pay for “elite” test prep companies. If anything, these school’s test scores highlight any inclination of balance of curriculum in the classroom on national surveys that are designed to test fairness for all students. As for debate that it takes an expensive prep school for students to do well on standardized tests, let’s go back to point one. To do well on these tests do not generally require weeks of labs, learning thousands of vocabulary words or tons of new math concepts since they don’t generally reflect the school’s curriculum. Any student, regardless of race, gender of economics, can learn the mechanics on how the test is written; the more they study the test itself they see the fruitlessness of memorizing a bunch of useless information. Often spending a lot of money on test prep doesn’t guarantee a better score. Also, fee waivers are available at most high schools to help defer the cost of testing so finances should never be an excuse for not taking the test.

The underlying reason colleges will continue to use entrance exams.

The bottom-line for the entrance exam comes down to rankings. Colleges go up on their rankings due to test scores so, the higher the test score-the money the students can get. This can equate to full-rides, free room and board, honors dorms, spending stipends and more. Although most colleges are concerned with their rankings, they don’t broadcast the significance of standardized tests and the role they play in admittance and scholarships but the information can usually be found on their perspective websites. They often will show you what scores give you what amount of money.

If students are waiting around to see if their college of choice will eliminate the SAT or ACT, they may be waiting a long time. It is better to accept the reality that colleges depend on test scores for fairness in the admissions process. Even at its core, the SAT, developed by Carl Brigham and first administered to freshman at Princeton, was to seek out the importance of mental-testing. In short, testing ability rather than knowledge.

END_OF_DOCUMENT_TOKEN_TO_BE_REPLACED

There are some things you need to homeschool but there are more non-essentials than there are needs! Find out which is which!