We recently moved to a new city. Being in a new place offers so many new adventures and as a homeschool family, that means a lot of learning opportunities. Visiting local museums is one of my favorite ways to discover a new city. Here in Columbus, Georgia, we have a few museums from which to choose. Our first visit was to the National Infantry Museum.

Columbus is home to the Fort Benning Army base. There is a very strong military presence here in Columbus and this museum not only showcases the history of Fort Benning but also of the military in general.

I would allow a minimum of three to four hours to tour this museum, and even then you would not be able to fully appreciate all of the 1,845 historical artifacts, the 36 interactive displays and the 42 individual monuments. You would have to allow additional time if you wanted to see a movie in the Giant Screen Theater or to walk through the outdoor exhibits.

There are so, so many displays here that it was almost overwhelming. I especially enjoyed the history of the infantry as it pertains to Columbus. My oldest son loves history and there was a display with documents, artifacts and uniforms from every war. My boys loved seeing all of the artillery and the uniforms that were worn during each of the wars. There is so much history that we discovered that we have never learned even while studying American history.

Samuel Lombardo was a rifle platoon leader and company executive officer during the Battle of the Bulge. He and his company longed for the sight of the American flag but when his request for one was denied, they decided to make their own. Using scraps from whatever fabric they could get their hands on (sheets, curtains, and even a German surrender flag), the soldiers worked by candlelight during battle to construct an American flag. It took them two and half months but the flag was completed and inspired the soldiers of the 99th Division. This actual flag was the first one to cross the Remagen Bridge during the war.

Speaking of inspiration, we saw the actual letters written by Generals Dwight Eisenhower, Sir Bernard Montgomery and Omar Bradley to inspire the troops that were on their way to land on the coast of Normandy, known as D-Day. Each letter conveys the confidence the generals had in their troops, the struggle that awaited them in the battle and the hope for a victorious win. 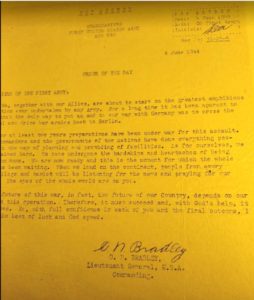 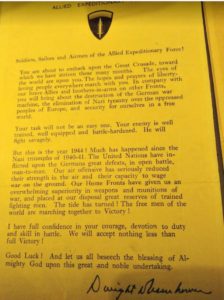 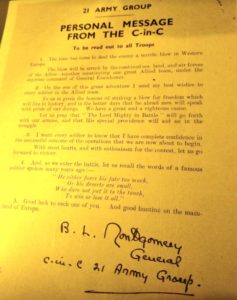 Even though we have studied Hitler, there was more for us to learn. Did you know that the head from a bust statue of Hitler was removed and was used as a wastebasker by an American officer? I bet Hitler never imagined that his head would be used for holding trash. 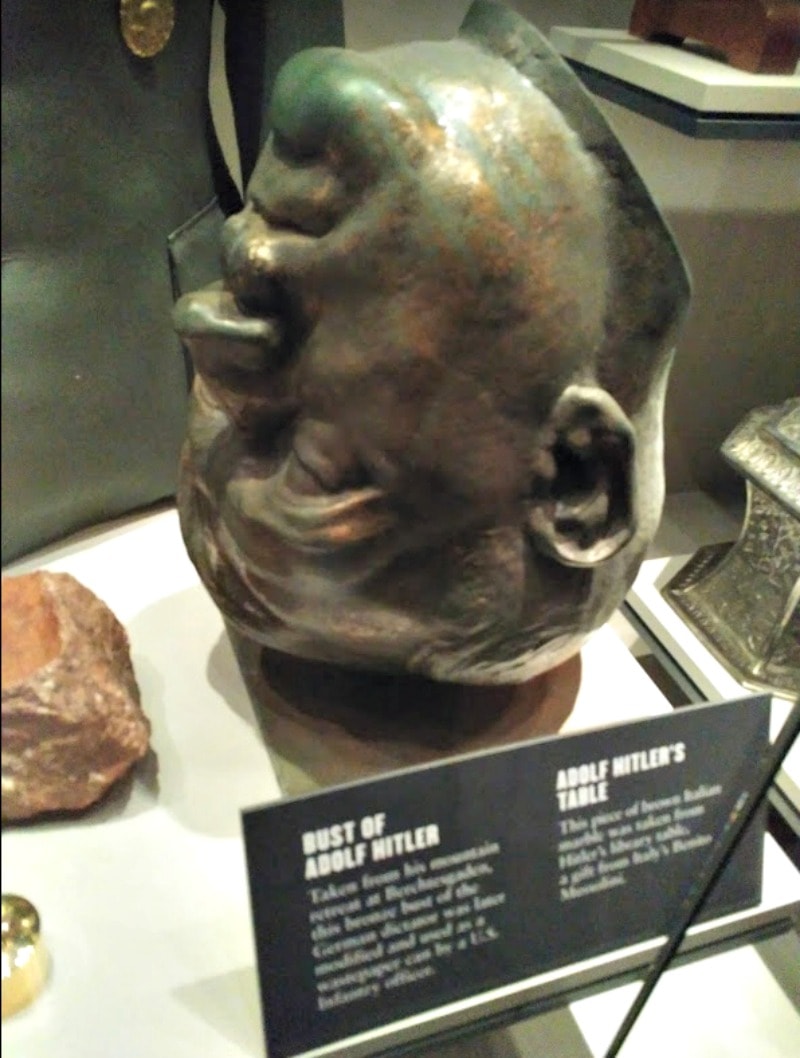 As interesting as the displays were, I think my boys most enjoyed the interactive displays. Their favorite one was where we could actually walk through a simulation of what it would be like if you were a soldier and had to walk through a jungle in Vietnam. My youngest was actually a little nervous because how realistic it was but you can pass this if you have younger children that might get scared.

The National Infantry Museum houses the largest certified Giant Screen Theater around here. It’s the Southeast’s first 3D laser light projection theater. Many of the shows rotate and you can easily find something to view to support your history, science, or geography studies. Occasionally, there are Hollywood movies that are also shown. At our first visit, we didn’t allow enough time to enjoy any of the shows but they are currently showing a movie about Lewis and Clark that I would love to go view. There is an additional charge for the shows unless you can attend during a special event when they sometimes allow free admission.

The museum even has its own restaurant. This isn’t just a cafeteria either. It is highly ranked as a local favorite and serves regional dishes. The prices are typical of most sit down restaurants but I have found discounts available online so search before you go if you need the additional savings.

The Dignity Memorial Vietnam Wall traveled throughout the United States for 23 years and now resides outside the museum. This is a 3/4 replica of the wall in DC and contains the names of more than 58,000 fallen soldiers.

There is also a walk through of World War II Company Street. These buildings were carefully restored. There are barracks and a mess hall, orderly room, supply room, chapel, and even the sleeping quarters all used by General George S Patton. These are the only preserved “700 series” buildings. 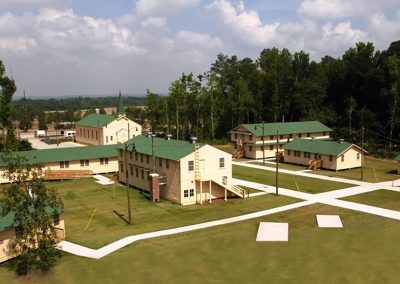 The National Infantry Museum is located at 1775 Legacy Way, Columbus, GA 31903. While there is no admission charge for the museum, there is a suggested donation of $5 per person. They are usually closed on Mondays. I suggest calling ahead of time or visiting their website prior to visiting for current hours and exhibits. Please be aware that Fort Benning graduation days will mean more traffic. Before you leave, be sure you make a personalized dog tag to remember your visit.

As we continue to discover Columbus, I invite you to subscribe to my blog. Once the construction is done, I will be adding events and sites specific to our new hometown.

Veteran homeschool mom of 20+ years, still teaching two remaining kids (high school and elementary). I believe learning should last a lifetime and I love to read, travel, drink sweet tea and am addicted to Pinterest.

Are you ready to transform a dull, boring day at home? Get ready to make it exciting by going on a virtual field trip your family will love! Follow these tips and ideas to create a virtual field trip that will be fun and memorable for your homeschool. Tips for a Perfect Homeschool Virtual Field END_OF_DOCUMENT_TOKEN_TO_BE_REPLACED

This art project was a great fit for our homeschool group. Here are the simple steps you can follow to create an Illuminated Manuscript with your crew!

END_OF_DOCUMENT_TOKEN_TO_BE_REPLACED

How Reading Aloud Will Catapult Your Child’s Homeschool Education

Reading aloud to your children can and will change the way they interact with others, improve their attention span, and so much more! Find out how.

END_OF_DOCUMENT_TOKEN_TO_BE_REPLACED

Veteran homeschool mom of 20+ years, still teaching two remaining kids (high school and elementary). I believe learning should last a lifetime and I love to read, travel, drink sweet tea and am addicted to Pinterest.

How Reading Aloud Will Catapult Your Child’s Homeschool Education