Sara McClure is a mom and certified teacher with experience in early childhood education. She holds a bachelor’s degree in Child and Family Studies with an emphasis on Early Childhood Education for grades PreK-4 and a master’s degree in Urban Education. After 5 years of classroom teaching, she transitioned to homeschooling her two boys.

For homeschooling families, the lines between preschool and kindergarten readiness can be a little blurred. Sometimes it can be tough to know if your child is ready to start kindergarten. Sure, there’s the age requirement that public schools have to use as a guide, but how do you really know when they are ready for kindergarten? The freedom that homeschooling brings can go several ways–start them early, start them on time, or start them late. The answer to the question about when to start homeschool kindergarten is ultimately an individual choice based on each child’s readiness. So, how do you know when to start their homeschool journey? If you’re on the fence, here are some things to think about to help you decide. 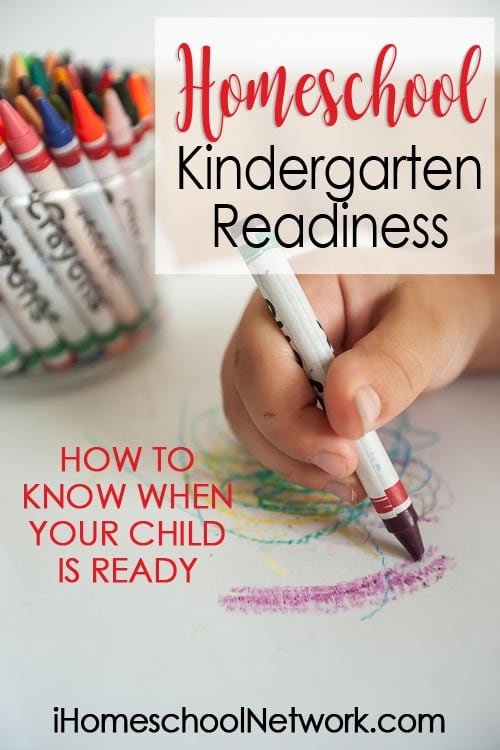 Things to consider for kindergarten readiness…

1. Age: The typical age for starting kindergarten is five years old. However, you don’t have to start then. Some of you might be tempted to start earlier, but others might need to start later. I encourage you to research the age requirements for your area as a starting point for this decision. Typically, children need to start by six years old.

2. Maturity:  Can your child sit for small periods of time to attend to tasks? While I’m a big fan of letting children have freedom to move during their learning, there are times that children will have to sit to accomplish tasks–for example, writing. Kindergarten children should not be expected to sit all day, but they will need to be able to focus on short lessons. For our youngest son this was not a task he could do, so we started him late. While he was ready academically, we knew he couldn’t sit still and concentrate enough for short lessons. We also compared his maturity to his peer group and realized he just wasn’t ready. Giving him the extra year allowed time for him to mature and be able to sit for longer periods of time for adult-directed tasks.

3. Knowledge of Basic Skills: There are a lots of things kindergarten children should be able to do before entering kindergarten, but they should at least have a few basic skills.

For a more in-depth list of things your child should know and be able to do see my list of 100 Things Kids Should Know Before Entering Kindergarten.

Closing thoughts: You know your child best. I have a feeling that deep down you already know the answer to whether or not to start your child in kindergarten. Follow your instincts and don’t listen to the opinions of everyone around you–because there are plenty of people ready to tell you what to do. If you decide to start your child early, know that you can always repeat kindergarten, or even shelve it for a time, if you get halfway through the year and realize they need more time to be ready. Each child’s journey will look different and there isn’t a hard and fast rule when it comes to kindergarten readiness. Make a decision and go with the flow knowing you can always make adjustments if needed.

Sara McClure is a mom and certified teacher with experience in early childhood education. She holds a bachelor’s degree in Child and Family Studies with an emphasis on Early Childhood Education for grades PreK-4 and a master’s degree in Urban Education. After 5 years of classroom teaching, she transitioned to homeschooling her two boys.

Home isn’t always pretty when life gets ugly, and if you’re a homeschooling parent it can be very discouraging to feel like you’re failing at your job. We’ve had our share of homeschooling through hard times and it hasn’t always been easy to stay the course.

END_OF_DOCUMENT_TOKEN_TO_BE_REPLACED

Check out five of the most common pieces of first year homeschool advice, which I ignored. And one piece of advice I did take and regretted.