Sophie Elise is the mother of four children, whom she homeschools in a creativity-fueled, mostly chaotic—and always cacophonous—setting. She lives with her family on British Columbia's west coast and writes about faith, family, and intentional living.

This One Habit Curbed Sibling Fighting in My Homeschool

Moms of multiple children know that sibling fighting while homeschooling can make or break the day. Here’s what worked to curb that in our homeschool. 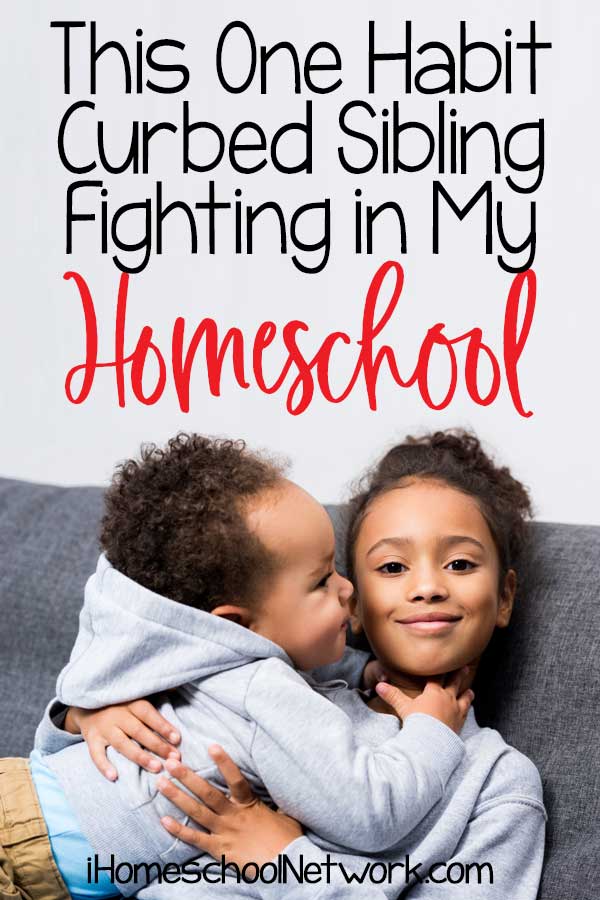 “It’s not my fault! She took the anatomy textbook again. I need it so I can finish my homework.”

Just as I was about to step in and settle this dispute between my two oldest children, my toddler seized the opportunity to snatch the drawing his five-year-old sister had spent all morning working on. She too burst into tears and let out a loud wail: “Moooooom!!!!”

It was just another day in my homeschool. The kids had started fighting before they even got out of bed—whose turn was it to put out the recycling again?—and I was on my third cup of coffee, desperately wondering how long until my husband would be home. A discouraging glance at the clock on the stove indicated he probably hadn’t even reached the office yet.

It was going to be another long one.

The Reality of Sibling Fighting in Homeschooling

We’d been homeschooling for seven years and our family had grown from two kids to four in that time. The first couple of years were blissfully fun: field trips, play dates, arts and craft projects every day. Back then, the kids fought, but it wasn’t too bad. Their fights could usually be resolved with a reminder about sharing.

But as the number of kids in our family grew and the academic rigor of our curriculum increased, a subtle but distinct shift occurred. The interpersonal relationships between our children became the number one issue in our homeschool. Instead of lesson planning, I was refereeing. Instead of teaching, I was counseling. My life revolved around keeping tempers at bay rather than any kind of educational endeavor.

If we were going to continue homeschooling, I knew something needed to change.

Why Homeschooled Siblings Fight So Much

The more time you spend with anyone, the more likely it is that you’re going to butt heads once in a while. This is true of adults, but even more so with children. Too much time in close quarters with someone else and all their little quirks start to drive you crazy. If you hear them make that disgusting sound one more time, you might have to hit them with the pillow.

It seems to me that homeschooled children must feel this way all the time. They’re with their siblings so much more than their in-school peers are and sometimes it’s hard for them to get breaks from each other. Over time, they start to irritate each other more and more, but there’s nothing they can do about it. They’re stuck with each other. All day. Every day.

Homeschooled siblings are also in constant competition with each other. Remember that kid in school who the teacher favored over everyone else? The one who always got called on to demonstrate or to show their work in front of the class? Now imagine that that kid is your sibling, the teacher is your mom, and the competition ever ends.

It doesn’t matter what they’re doing—anything can be made into a competition. It’s not that they do it on purpose (though sometimes I suspect they do), it’s just natural. There’s (usually) only one parent doling out attention during the school day and there’s a limited supply of it to go around. Everyone is vying for that attention whether they realize it or not. Sometimes they seek attention by doing something really good; other times, by screaming the loudest.

In my house though, I find the most common attention-seeking tactic is the request for justice. More than any other conversation starter, the “so-and-so did such-and-such and it’s not fair, do something about it” line is delivered to me constantly by all four of my children. They’ve been told not to take justice into their own hands, so they know they’ll get my attention when they ask me to fill this role.

Don’t worry, I’m not going to go down the whole homeschooled children lack adequate socialization path. We all know this is a myth perpetuated by people who’ve clearly never peeked inside a homeschool mom’s planner. (If you have any doubts about that, read this post). However, there’s something to be said for a little more socializing.

Do you ever find that a space filled with four kids from one family feels completely chaotic while a house filled with eight or twelve kids from two or three families feels totally sane? This notion took me a long time to grasp, but once I saw how much nicer my kids were to each other when their friends were around, I started inviting over other homeschooling families all the time.

There is something about the presence of other people from outside the family that breaks up the tension between kids. Maybe it’s because they don’t want to bring out their mean streaks in front of their friends. Or perhaps it’s just that friends make everything more fun. What I know for sure is that when we spend the whole day alone at home as a family, the fighting intensifies something fierce.

How Sibling Fighting can Derail Your Homeschool

Homeschooling is a marathon, not a sprint. It requires perseverance, determination, and strength if we’re going to see it through. While not everyone intends to homeschool straight through high school, most of us at least want to have the choice. Therefore, we have to avoid burnout and other homeschooling pitfalls, such as overwhelming rivalries between our children. There are several reasons why sibling fights can derail your homeschool:

The Habit That Saved Our Homeschool from Sibling Fighting

By last summer, I’d had enough. We needed to find a way to curb the sibling fighting in our house, or our homeschooling days were definitely numbered.

So, as I planned out our daily schedule for last year (inspired by Sarah Mackenzie’s amazing book, Teaching From Rest), I tried something different.

Each day, I scheduled at least one hour of one-on-one time with each of my kids. Yes, each of them. That’s four hours or almost half of the available hours in our homeschooling day. For one-on-one time.

Time that they get me all to themselves. Time where we either work on the subject that is trickiest for them or if they’ve finished their work for the day, do whatever they want. That could mean going for a walk, playing outside, writing a story together, or having me listen to them read. It could mean nothing. But it also means everything.

It’s one hour of my time that they don’t have to fight for. One hour in which their siblings are not allowed to come and report injustices to me. One hour where their tanks are getting filled up.

HOW WE FIT THIS IN

When I first added this one-on-one time to our schedule, I didn’t think it would work. Surely, I thought, they’ll still fight. We won’t get enough done. It will be too difficult.

But I was wrong. It turned out they loved and coveted these times so much, they actually worked harder to ensure they’d be done their academic work before they had their time with me. They became more productive, which meant they spent less time fighting when they were together.

It’s also a matter of logistics. We’re fortunate in our family to have pre-teen children who are capable of watching their younger siblings. So, when I’m with each of the little ones, the older ones can take turns watching someone and doing work. Yes, this sometimes leads to its own disagreements, but usually, they can solve these themselves with a timer and some negotiations.

I think this trick works for a few different reasons.

It isn’t a perfect solution, of course. Siblings are always going to fight to some extent. But investing this time in building individual relationships with each child took from being ready to throw in the towel on homeschooling to actually envisioning our family being in this for the long run. Maybe it will help you get there too.

If you want to take a peek at what our schedule looks like, check it out here.

Sophie Elise is the mother of four children, whom she homeschools in a creativity-fueled, mostly chaotic—and always cacophonous—setting. She lives with her family on British Columbia's west coast and writes about faith, family, and intentional living.

Growth mindset in your homeschool results in higher productivity, more joy, less stress, and increased resilience. Five key phrases will get you started!