Fables and fairy tales can be used to build virtues in homeschoolers, as well as universally acknowledged good traits, and moral imagination. 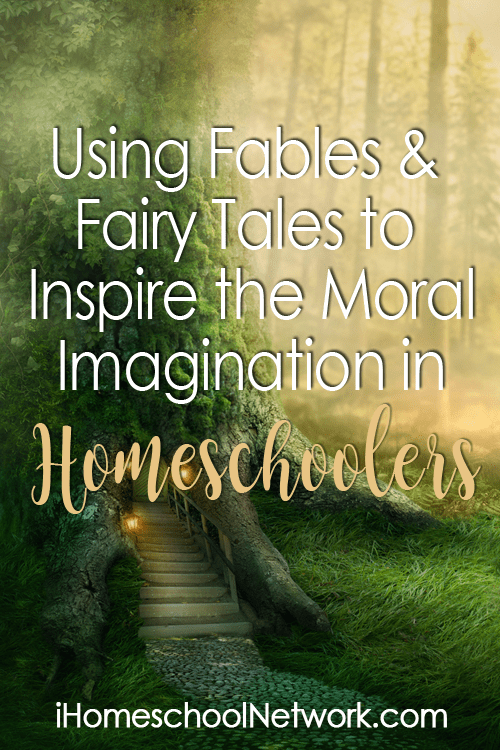 What is the Moral Imagination

We spend much time on character training through the years of raising our children, but didactic goals are not the end-all be-all of helping our children learn truth. Truth, the internal and heart knowledge of what is right or wrong based on morals rather than feelings, is what ultimately guides our children in their life choices. The Moral Imagination is the key to overcoming feelings that will often justify poor choices. The Moral Imagination builds virtues, traits that are universally acknowledged as good, and clarifies that vices are the opposite and not a matter of degree.

By using quality literature and stories to saturate our children’s minds and hearts with virtuous deeds, we involve our children in the development of their morals rather than just telling them to do ______(fill in the desired character trait). In these stories, good wins in victorious battles, and honesty is valued above all. The wisdom in these tales inspires our children to wonder:

Literature helps them imagine their own brave adventures, filled with hard choices. Then they are driven to be the virtuous heroes and heroines of their own story.

A word of caution about twisted tales. We do not generally think of children’s literature as causing future harm, but we can confuse the moral imagination of our children and even ourselves when we indulge in literature where good and evil are twisted into reverse. Some examples are stories where dragons are good, Twilight by Stephanie Meyers where vampires are the “good guys”, and any stories where archetypal characters are inverted to make evil seem good and good seem evil.

Building the Moral Imagination with Fables and Fairy Tales

Classic fairy tales are built on the foundation of good versus evil and good winning, though each story can have that ending in multiple ways. When your child hears of Saint George and his exploits or Joan of Arc it won’t take long for them to be running around pretending to be those heroes of old. Andrew Pudewa calls these stories where good triumphs or is redeemed over evil “whole” or “healing” stories. These are the stories that build up our souls and align our morals with truth. Fairy tales, fables, classic stories, and a few modern tales all accomplish this remarkable feat.

Literature can be a gift to our own souls and those of our children. We just have to carefully choose the stories.

Many classic stories are included in collections of Grimm’s Fairy Tales and Hans Christian Anderson collections. It is better to avoid the Disney versions and stick with the originals. Some other wonderful stories include:

END_OF_DOCUMENT_TOKEN_TO_BE_REPLACED

I received compensation in exchange for my time and review of Big River Academy homeschool curriculum. All opinions are my own. I’ve always been a hands-on curriculum kind of homeschooling mom. We’ve grown butterflies for science, visited museums for history, and drawn comics as creative writing. I usually expand on book-based curriculum with my own END_OF_DOCUMENT_TOKEN_TO_BE_REPLACED