When it comes to teens, classic literature gets a bad rap.

Dickens? He got paid by the word.

Hawthorne? Really, mom? A is for apple.

It can be hard to sell the canon to a group of buyers beware. 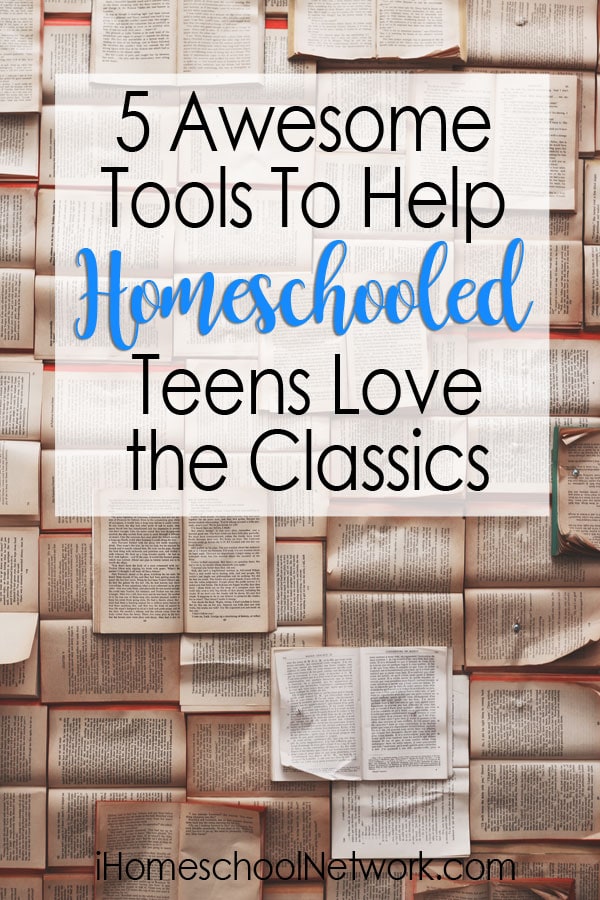 The classics are classics for a reason: they speak to the human heart.

They awaken the senses, challenge our perceptions, and encourage us in the dark. When we read and engage the literary canon, we develop a deeper appreciation for art, language, and history. In essence, to experience classic literature is to be its captive. Once you’re hooked you can’t escape its thrall.

I know – I tend toward the dramatic. But it’s a phenomenon I’ve seen firsthand. For seventeen years I’ve had the privilege of teaching high school literature; I’ve had students in both mainstream and homeschool settings. For both groups, the moment I mentioned a classic title, a large number of them would fall over in their chairs. I always got them hooked, though, and it was like magic.

While my approach may look like magic, there’s no sorcery (or bribery) involved. Just 5 awesome tools I keep in my toolbox, and they work.

Remember highlighting in college? That persistent squeak? Those vibrant colors?

That giant block of colored text you had no idea why you noted?

Annotation is not that.

While similar to highlighting in some ways, annotation moves from mindless marking to intentional engagement. A classic novel is a jigsaw puzzle, and annotation brings the pieces to light. Where once a student might have missed an integral moment or connection in a haze of zombie-eyed reading, annotation requires attention, deduction, and the implementation of critical thought. A reader who annotates converses with the text, asking questions, making observations, and even challenging themes or conventions. Just remember to underline sparingly, devoting most of your time to recording notes in the margin. You’ll be amazed by the connections you see.

What would happen if Romeo and Juliet had cellphones? Would their text messages read like the play? Adaptation invites readers to experiment with place and time while leaving the heart of the classic in place. I’ve had students turn Beowulf into a graphic novel and The Odyssey into a magazine spread. I’ve even seen adaptations similar to Grendel, where a student rewrites the story or scene from the perspective of a villain or minor character.

The only limit is the reader’s imagination.

It seems the book is always better than the movie – why not figure out why that’s the case? After your reader has annotated the novel, rent a few screen adaptations and host a movie night.

There’s no shortage of novel/film combinations to choose from, but a few of my favorites include Frankenstein, Romeo and Juliet, Great Expectations, and The Great Gatsby.

You may have heard of Reader’s Theater, an approach to active reading that brings a text to life. Try taking this technique one step further with a full-scale production of a novel or scene. Have your reader take cues from his adaptation and decide on a setting for his film. Draft a screenplay, cast some characters, select costumes, and dive in – you can even host a neighborhood screening to show off the directorial debut.

Every film needs a solid soundtrack, one that complements integral scenes. Identify 10-20 moments in the novel that would benefit from a bit of accompaniment, then match it with an appropriate song. Readers can take the project one step further by writing a short analysis of each song choice.

The key to these five tools is accessibility: breaking down barriers so teens take it in stride.

Shakespeare can feel like a foreign language, and Dickens’ insight does go on for miles. But there’s inestimable wisdom in the words of these writers.

Our teens will see it – and fall in love with it – if we only give them the chance.

END_OF_DOCUMENT_TOKEN_TO_BE_REPLACED

I received compensation in exchange for my time and review of Big River Academy homeschool curriculum. All opinions are my own. I’ve always been a hands-on curriculum kind of homeschooling mom. We’ve grown butterflies for science, visited museums for history, and drawn comics as creative writing. I usually expand on book-based curriculum with my own END_OF_DOCUMENT_TOKEN_TO_BE_REPLACED