Ashley Moore left the world of veterinary medicine to homeschool her 4 spirited children. A life long science lover, she is still thrilled with baking soda and vinegar volcanoes, but she also loves learning in general. After all you can never know everything! She shares fun, hands-on learning activities and homeschool insghts on her blog Life with Moore Babies.

Escape Rooms: a Way to Teach Critical Thinking to Homeschoolers

Escape Rooms: a Way to Teach Critical Thinking to Homeschoolers

Escape rooms, the whole world seems to be going crazy for them. Have you tried one yet? If so, you probably understand why. They make you happy!

Say what? How would being locked in a room with a bunch of people make someone happy? 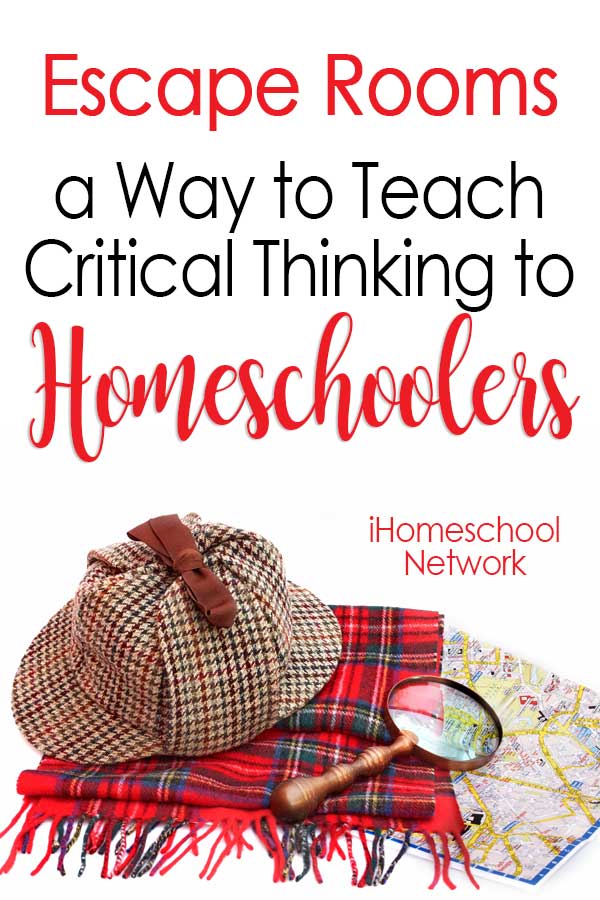 You see giving your brain a workout with all the problem solving that goes into escape rooms actually releases dopamine which is the happy hormone.

The benefit of a better mood is only temporary, but even bigger benefits come from the increased critical thinking ability gained from escape rooms.

What is Critical Thinking

Critical thinking is a way of problem solving that emphasizes the need to be well-informed and open-minded prior to making a decision. Someone who is thinking critically will not be led by emotion, but through reasoning and evidence.

Woah, reading the above definition of critical thinking makes it sound like a pretty big thing to expect kids to do. I mean, mine are still known to have a meltdown because they were given the wrong cup.

They can do it though. Kids can learn to think critically. After all when your child started reading you didn’t hand them a classic novel, and when they started math, they didn’t start with calculus. Like everything else, there is a learning curve involved when practicing critical thinking.

Why Kids Should Learn to Think Critically

Plus, you have the benefits of the actual problem solving including increased creativity, better memory, and improved mood, remember dopamine.

Aside from these benefits, critical thinking is a must have in nearly all professions.

So how do you get kids thinking critically?

Well there are a lot of curricula available that teaches kids how to recognize patterns, rearrange shapes, and work through analogies, and these are great, but if you want kids excited about critical thinking try escape rooms!

What is an Escape Room

If you haven’t participated in some form of escape room, you might be wondering what I’m even talking about. An escape room is a game in which a team of players must solve a series of puzzles to complete a given objective (generally to escape the room) within a specific time limit.

Unless you are fan of puzzles this may not sound like a fun time, but surprisingly it is, thanks to dopamine.

Since escape rooms are in essence a game, kids are quick to participate in them. I recently hosted a local homeschool cooperative class that was a new escape room each week in an effort to increase the critical thinking skills and group cooperation in the kids. Most of the kids had never done an escape room, but they were all eager to sign up!

If you look at the skills needed to be successful in an escape room, they look very similar to the list of skills used by critical thinkers.

What skills are needed to solve an escape room:

There are many ways escape rooms bolster critical thinking skills in kids. I saw it first hand in our homeschool co-op and in my own kids.

Remember, we said escape rooms are all about solving puzzles to reach an end goal. You cannot solve puzzles without thinking critically. In fact, when you go into an escape room and don’t use your critical thinking skills you likely won’t get out. We saw this when we first started escape rooms with  local homeschool kids. They walked in and freaked out instead of looking for the puzzles, or they decided the puzzle was too hard and gave up. Either way the puzzles were ignored and the kids did not escape.

Not only do you have to solve puzzles to escape, some of these puzzles require acute attention to detail or remembering something found earlier in the room. One puzzle we used was an auditory puzzle where the kids had to be quiet to hear it, talk about attention to detail. Several puzzles used information from previous puzzles in the room, so the kids were expected to remember that the information is available and connect it to the later puzzle.

Escape rooms also require you to communicate and work as a team. It is highly unlikely that any one person can solve every puzzle in a given room, but utilizing the skills of everyone makes it much more do-able. Remember the auditory clue mentioned above, this was a great example of how the kids need to practice working better as a team. In the first co-op class only one student noticed it, but she chose to ignore it rather than mention it to the group. The kids had to use a hint needed card to locate this clue. In the second class a couple kids noticed it and immediately told everyone to be quiet. As a result they found and solved the clue with no hints.

Escape rooms also require time management skills. If you spend all your time on wild goose chases, you won’t escape. Multiple times kids misinterpreted a clue and would not let go of their idea even after seeing it wouldn’t solve the problems. They wouldn’t listen to other kids that had other ideas. This wasted a lot of time. Likewise if we had locks in the room, many would just try to pick the lock  wasting more time.

Towards the end they were even talking about how the last escape rooms had gotten easier. In reality the last few rooms we did were significantly harder than the first few; the students had just grown their critical thinking skills.

Ready to start using escape rooms to improve your kids critical thinking skills? Let me give you a few tips to get started.

Find a Group for Your Escape Room

Finding a group of kids who want to try escape rooms shouldn’t be super hard. Grab your local homeschool co-op kids, church kids, or just a bunch of your kids friends. You don’t need many, we found 5-7 worked well, many more and the communication became an issue. Also be sure they are all similar in age! We had a wide age range at 8 to 13-year-olds, and found the 8-year-olds didn’t work as well with the group. A more narrow range of maybe 3 years would be ideal.

This post may contain affiliate links which means I may receive a small amount, at no cost to you, if you make a purchase through a link.

Now find some escape rooms (or make them if you are adventurous). This isn’t as hard as you might think. There are several escape room board games (like this one or these) available commercially, but these are geared toward older kids (think high school and up) due to the difficulty. If you are a typical homeschooling mom, like me, who thinks everything should be educational, you can find themed printable escape rooms online for a small fee. The good thing about these are they are sorted by age and you only need to print them and set them up; no additional props needed. If you want things planned out, but you are prepared to provide a few props of your own, you can find some escape rooms with printable instructions here.

No matter what type of escape room you choose, you must always tell the kids what their limits are. If you are in a borrowed room and don’t want them riffling through things tell them nothing is hidden in the cabinets. Don’t want them taking things off walls, tell them. Don’t want them writing on printables, tell them (and provide scratch paper). Also be sure to tell them how long they have to solve it!

As a side note, always provide scratch paper and pencils!

Now, you can’t just walk off and expect the kids to solve the escape room. You (or another adult) needs to stay to help guide them. Let the kids find the puzzles, let them try to solve them, but if you see they are really stuck on something, step in and ask them questions about the problem to help lead them to the solution. Notice I didn’t say tell them the solution or even directly how to solve the problem. Just lead them through the problem. They will get their dopamine increase and want to solve more.

Also, if you notice someone not helping, suggest places they can help. If someone is being ignored point it out to the group, so they can learn to listen to others. Essentially, you want to point out areas they need to improve to make them better critical thinkers.

And when they use those problem solving skills, tell them that they did well reasoning through the problem or that they worked hard and worked it out. Praise them briefly for their use of critical thinking skills and move on because the clock is still ticking. We found it effective to call out loudly that another puzzles had been solved. This cause a quick cheer followed by an increase in effort as the dopamine was now shared with the group.

Ashley Moore left the world of veterinary medicine to homeschool her 4 spirited children. A life long science lover, she is still thrilled with baking soda and vinegar volcanoes, but she also loves learning in general. After all you can never know everything! She shares fun, hands-on learning activities and homeschool insghts on her blog Life with Moore Babies.

Teaching Textbooks is an amazing, flexible math curriculum for parents that want to take the stress of math off their daily plate. Teaching Textbooks requires zero prep for the parent. It’s also easy to implement in the whirlwind of homeschool life, offering help whenever kids need it. Parents can just set their kids up and supervise. Even the grading is done for you.

END_OF_DOCUMENT_TOKEN_TO_BE_REPLACED

Great educational ideas for camping shared by a homeschool family who loves to camp. Ideas for daytime and nighttime fun are included.

END_OF_DOCUMENT_TOKEN_TO_BE_REPLACED

Homeschool field trips offer wonderful opportunities to learn all year long. Here are simple ways to keep them cost-effective and a lot of fun!