Why Homeschoolers are Accused of Not Fitting In: Because They Don’t

If there is anything that annoys the tar out of a homeschool mom, it’s the accusation that her kids are not being socialized. Secretly in her heart, the homeschool mom sees the scorn in people’s eyes when her kids do something odd. She herself judges her kids with the same eyes, having grown up in the group-think culture. She is embarrassed in the same way that she was when the cool girls in school made fun of her sweater.

There is certainly something quirky about homeschoolers. Let’s stop denying it. 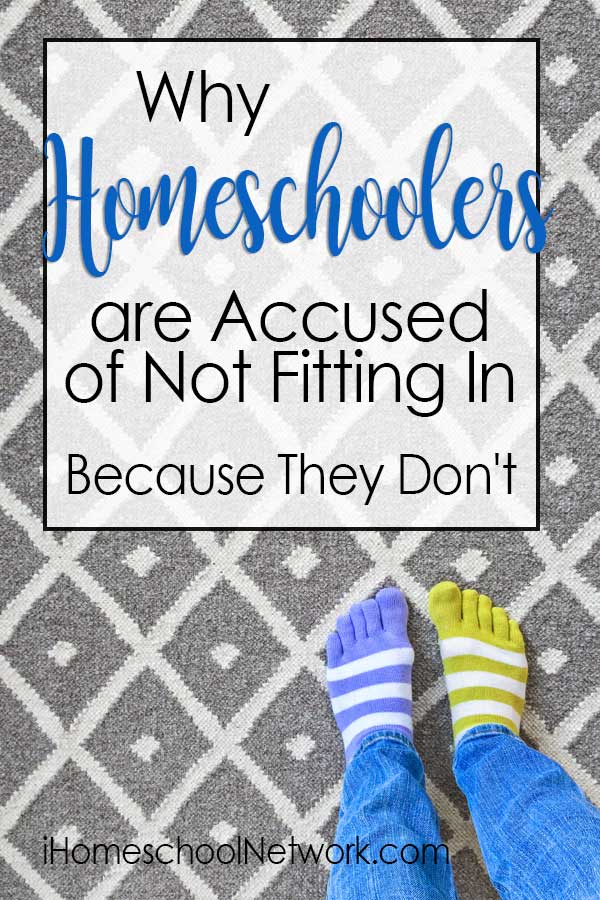 It’s the elephant in the room. We try to hide it by teaching our kids how to stand in line, but no matter what we say, they still don’t hop-to at the sound of a bell the way the public school kids do. That’s because they have been trained differently.

They will always see the world in a different way, and that is okay. Not only is it okay, but it’s deeply needed in our American culture, where the majority of kids are churned out as mindless people who stammer and can’t answer basic questions. That’s because aside from school, all they do is watch television, play video games, and “hang out” with kids who watch television and play video games.

And we wonder why our nation can’t compete with other nations any more.

The reason homeschooled kids don’t fit in to society at large is the same reason third culture kids (TCK’s) don’t ever fit in either. TCK’s are people who grow up overseas and then return to the country of origin and never belong in either culture. But they are usually bilingual and have an astounding mind and are considered highly valuable in almost every career.

When children grow up in a group think-tank of mass instruction like the public schools, the children are churned out speaking similarly and thinking similarly. That’s because they have listened to the same instruction.

When you have individualistic instruction, when you see life in a unique and different way and are not punished for it, you have a chance to actually have a mind of your own. And this is what regular people call socialization. It’s the same “problem” that TCK’s have—a unique perspective that makes them a more valuable writer, creator, doctor, scientist, etc. When a person has the ability to think outside the box, that person has an advantage over other people and can solve problems other people can’t.

Yes, there is something quirky about homeschoolers, but it’s what gives them a leg up in this world of copy-cats. This whole lack of “socialization” is an asset. Homeschool moms, be proud that your kids don’t hop-to at the sound of a bell—that they can speak intelligently with people of all ages, that they actually have something to say about the evening news. Don’t cower and shrink back when they do something that you wouldn’t. Don’t get angry with them, as if they’ve done something wrong.

I mapped out an amazing line-up of unit studies, my son was enjoying school, and all was well. Then we discovered interest-led education.

END_OF_DOCUMENT_TOKEN_TO_BE_REPLACED

The fears lurk on both sides of the public school vs homeschool debate. Resources to help you instill unique family values in your homeschool.

END_OF_DOCUMENT_TOKEN_TO_BE_REPLACED

Mix up your homeschool lesson plan by using an Unconventional Holidays calendar this year! Kids will love the fun environment these holidays create!