What To Do When The Homeschool Blahs Have You Down

15 Stealthy Ways to Encourage Writing in Your Homeschool

Tips for Homeschooling a Child with Mental Illness

The Fail-Proof Response for the Homeschooling Naysayers

“Your son is so articulate. Most kids that age can’t even look an adult in the eye better yet carry on a meaningful conversation. You must be so proud!” she said from behind the counter.

“He’s a good egg,” came my quick reply. I gathered up my mounting stack of books in hopes of making a fast exit. I could sense what was coming. 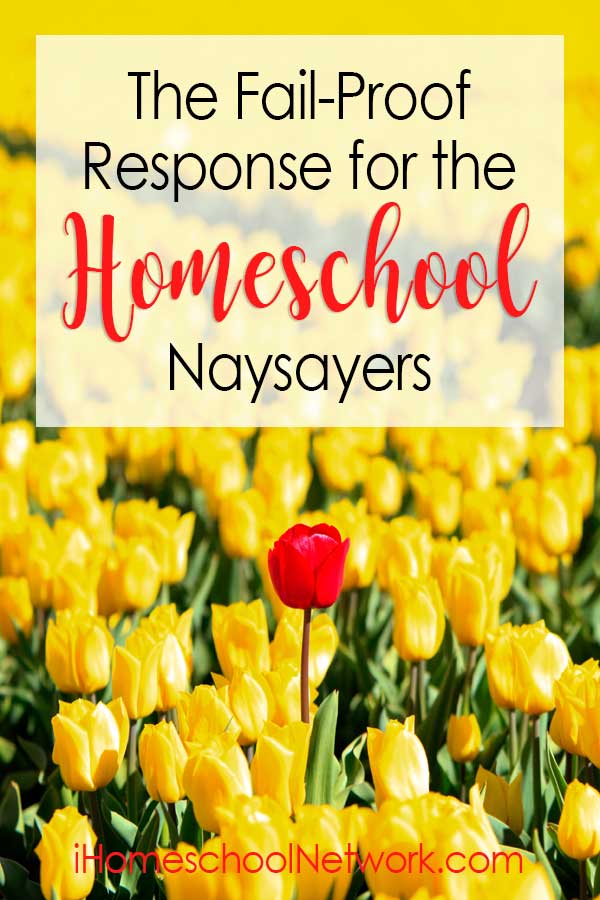 “What school does he go to?” she asked. As a former public school teacher turned volunteer librarian, she was always curious to know which elementary schools in our teeny tiny town were most represented by library patrons. It was a not-so-secret competition she played in her head; pitting these kids against those, this school against that one.

“I homeschool!” he said proudly, answering before I had a chance to reply. She looked from him to me with a raised eyebrow.

“Oh. Aren’t you worried about socialization? How will he ever make friends?” Her words were clipped and questioning. I was half expecting an interrogation light to drop down from the ceiling, blinding me into submission.

I opened my mouth to reply, but the words wouldn’t come. I had been here before. Many times. Perhaps not with this same woman or at this same library. But in the past twelve years of homeschooling, I’ve had the “S” word flung my way more times than I care to count.

The irony of the cross-examination was not lost on me. On the one hand, this inquisitive, albeit somewhat nosy librarian was impressed with the conversation skills of my ten-year-old, but on the other hand, she was worried about his ability to assimilate into society, or at least the social circles of other ten-year-olds.

Like I said, I’d been around this same block a time or two thousand and had all kinds of rebuttals formed in my head. As I stood there under her scrutiny, the ghost of confrontations past immediately began to flood my memory. When questioned in the early years, my answers always went a little something like this:

Clearly, I’ve thrown out my fair share of sharp words to all the homeschooling naysayers. I’ve matched snark for snark. I’ve done a lot of jeering and finger-pointing. But here’s the cold, hard truth that I’ve learned in the last twelve years while underneath the educational microscope: shouting from the curb rarely ever converts anyone or drags the critics across the picket lines. Some folks won’t ever approve of your choice to homeschool. They’ll see it as an affront of their own decisions–as if in rejecting their way of educating, you’re rejecting them.

As easy as it might be to lose your tongue and ooze vitriol at anyone with a questioning tone, remember that every second you spend trying to change fringe opinions or garner social “likes” for your homeschool, you are actually robbing time away from the work. You are allowing the naysayers to steal the very joy that led you to this choice in the first place.

Truthfully, the best defense is always a good offense. Let your child be your fail-proof response. Allow his or her kindness, curiosity, diligence, manners, and know-how speak volumes.

That day in the library, I could have barked out a harsh reply. I could have given that woman all kinds of proofs and statistics to let her know that my son was fine and that I’ve got this! But I didn’t. I let my son’s smiling face and gracious response be enough. He and I gathered our things, thanked the librarian for her time, and left.

We’ve seen her milling about the stacks of books many times since and each time, my son waves and says, “Hello.” He fills his bag with new-to-him titles and stops to help his younger siblings find a few of their own. He lives out his “socialization” right in front of her. And that is all the evidence I need to offer.

Momma who is struggling under the critical eye of the homeschooling naysayers, know this: one day, all those flimsy, fault-finding words you’ve gotten from others will blow apart. Your child will be proof enough that homeschooling was the right choice. But in the meantime, don’t allow someone else’s disapproval to pull you off course or sink you to low levels. Instead, try civility. It will always help to smooth the way.

Need some help in forming a kind answer, one that’s not draped in sarcasm and cutting words? I’ve gotcha covered. Recently, I asked a lovely tribe of homeschool moms over at The Unlikely Homeschool to share their best response to biting questions. Here’s what they had to say.

What to Say to the Homeschool Naysayers

“I really enjoy spending time with my children. I’d be jealous if someone else got every day with them.”

“I’m thankful that we each get to choose what we think is best for our own families.”

“Spending 6+ hours a day in a classroom is just not the best way to learn about the world and gain new experiences, so if I’m able to offer a better educational alternative for my children why wouldn’t I?”–Angela

“Most homeschooled kids get their work done in about half that time. [There’s] lots of wasted time in public school.”–Carolyn

“Thankfully, we all get to do what works best for our own families. I love the freedom we have in that. However, I think you’d be surprised at what you CAN do. We love it!”–Stephanie

“My husband is a pastor, so our schedules are very different from the average work week. We like the flexibility of homeschooling.”–Caryn

“If I was worried about how other people felt about my decisions, I wouldn’t have done half of the things that I love doing.”—Jessica

“How you get an education doesn’t matter. It’s who you’re with when you get one that matters!”–Melessia

“It’s what’s best for us. We know it isn’t the right decision for everyone. We don’t judge you for sending your kids to public school, so please don’t judge us.”–Shannon

“They can both be the right choice. We don’t have to compete. We can support and love each other without making all of the same choices.”–Lisa

“My kids are bright. I don’t want them to be bored when they can be learning. And I had bad experiences in public school.”–Nicky

“Since I was a young child, I knew that I didn’t want to institutionalize my own children in government facilities for the majority of their waking hours. Our priorities and values will determine the choices that we make for our children.”–Suzanne

“Homeschool has helped me be a better mom. I know and understand my kids better after being their teacher and that makes it worth all the effort.”–Megan

“The family was the first institution set up for the training and education of children. Parents still meet the requirements to teach their children, even when they are 5 years and older.”–Suzanne

“Homeschooling wasn’t in my plans, but it’s what God called me to.”–Erin

“My kids are learning to do all the things your kids are learning AND how to do household chores, finances, grocery shopping on a budget, and other such real-life responsibilities they will need to know for the rest of their lives. I’d rather my kids be prepared for real life than ‘real’ school.”–Bri

What To Do When The Homeschool Blahs Have You Down

Ever made it through a holiday break & then feel less motivated to pick homeschooling back up? Here’s what to do when the homeschool blahs have you down.

END_OF_DOCUMENT_TOKEN_TO_BE_REPLACED

15 Stealthy Ways to Encourage Writing in Your Homeschool

Writing should be about engaging with rich thoughts and ideas. Here’s how to inspire your homeschoolers to engage with writing.

END_OF_DOCUMENT_TOKEN_TO_BE_REPLACED

Should You Change Your Homeschooling Approach?

Are you thinking of changing your homeschooling approach? Here’s what you should consider before you make the switch with your family.