Megan has been homeschooling her two teen girls since they started school. She is dedicated to helping moms realize that middle school can actually be the best years to homeschool, especially when you use creative activities and unique tools.

Easy Ideas for Teaching Middle Schoolers How to Cook

If you’re studying the Middle Ages in your homeschool, don’t just teach your older kids about this era, engage them by adding some fun medieval activities for middle school to your lesson plans. 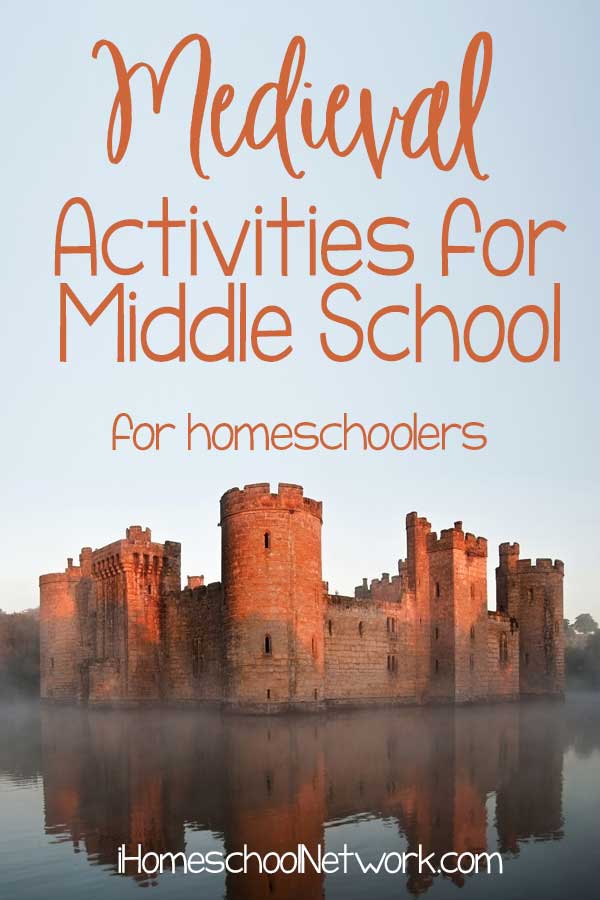 It’s easy to make history interactive when you’re learning about this time period.

Most older kids learn best while immersing themselves in history instead of just reading about it, so make a commitment to spend more time on hands-on activities during your Middle Ages studies.

Make a Coat of Arms

A major emblem from Medieval history is the coat of arms. While the practice of heraldry began back in ancient times, it flourished in the Middle Ages.

The knights began adding colorful motifs to their surcoats, shields, and horses to distinguish themselves from each other. Since they were covered from head to toe in armor, these designs made it easier to identify someone during a joust. Over time, a complex system of design rules was created, ensuring no two individuals (or families) had the same image.

Encourage your tween to research and construct their own coat of arms.

First, they should choose the shape of their shield. Then, it’s time for the design. They can add symbols from medieval times or an image of something that’s important to them.

Make a coat of arms by:

If your teens are interested in medieval weapons, let them make their own.

As we studied the Middle Ages, one of our favorite projects was creating duct tape weapons.

My girls wanted to learn more about knights and weaponry, but I didn’t feel comfortable giving them actual swords and shields. So, they made some out of simple materials from the hardware store.

Within 30 minutes, their weapons were finished and they were off to battle.

Food was an important part of the Middle Ages, especially for nobility.

Did you know that one of the oldest cookbooks was created by the master cooks of King Richard II in 1390? The recipes (over 200 of them) taught cooks how to make common dishes as well as elaborate banquets favored by kings and queens.

Since this historic collection, known as the Forme of Cury or Method of Cooking, was published during this era, it makes sense to cook some medieval dishes with your teens to give them a sense of what people ate.

Wondering where to begin?

First, decide whether you’d rather eat like a peasant or pull together a medieval feast fit for royalty. If you’re not sure, choose a couple of recipes from both classes and combine them into one meal. Then choose a recipe – either the original or a modern version.

As you’re cooking and eating, ask questions like “who ate this and why?”

One of my favorite resources is the Mystery of History Volume II Cookbook from Bright Ideas Press. The recipes are easy to follow, include historical and geographical information, and they’re delicious. We enjoy the gyngebred, (gingerbread) dish so much that we bake it every Christmas.

A simple peasant meal to recreate is pottage and bread.

Pottage was a thick vegetable soup or stew and was served with dark brown barley or rye bread. It was made over an open fire, with vegetables and grains farmers grew themselves and the ingredients varied by seasons. Frequently, it was heavy on one particular vegetable, like cabbage or leek, with a couple more added in along with fresh herbs for flavor.

To eat like a king, you could roast a huge hunk of meat, but why not make a yummy dessert instead?

A familiar recipe from King Richard II’s cookbook is a bread pudding called Payn Fondew. This dish isn’t considered extravagant now, but it was back then. It was made with raisins, sugar, and exotic spices (cinnamon, ginger, and cloves), so it was only eaten by kings and their court.

Although life in the Middle Ages was difficult for many, people still found some time for entertainment, including sports and games. These activities helped break up long, dreary days for the lower classes. Sporting events allowed knights and nobles to increase their fighting skills and show off.

The people of the Middle Ages enjoyed a wide variety of games, many still played today, like tag, hopscotch, blind man’s bluff, and hide and seek.

Learn How to Play Queek

An easy game to learn and play is queek. All you need is a large checkerboard surface (a checkered cloth, a checkerboard, or one chalked on your driveway) and some pebbles.

Players take turns tossing stones onto the game area, calling out whether they will land on a light or dark color prior to their throw.

For example, if you guess light and your pebble lands in a light square when you throw it, you gain a point. If the stone lands in a dark square (and you guessed light), you get zero points.

Play continues until everyone has flipped all of their rocks onto the board. The person with the highest score wins.

If you happen to own a set of horseshoes or bocce balls, grab them and head outside. Both of these games were popular during this period, so they would be a simple way to learn more about medieval sports.

Adding one of these to your school day is the perfect way to bring fun and physical movement to your older kid’s studies.

This is just a small sample of the ideas that can deepen your tween’s exploration of the Middle Ages. Hopefully, you’re inspired to make some room in your lesson plans for some fun, medieval activities for middle school.

What is your favorite medieval activity for older kids?

Megan has been homeschooling her two teen girls since they started school. She is dedicated to helping moms realize that middle school can actually be the best years to homeschool, especially when you use creative activities and unique tools.

One of the things that we homeschoolers take great pride in is how we focus on preparing our children for life, not just college. I often hear about how one of the advantages that homeschooled kids have is their opportunities to interact with people of different ages, as opposed to simply their peers. We study END_OF_DOCUMENT_TOKEN_TO_BE_REPLACED

Get your middle schoolers excited about geography by adding these hands-on geography activities to your homeschool lesson plans.

END_OF_DOCUMENT_TOKEN_TO_BE_REPLACED

One STEM Activity for Every Age Level? It’s Easier Than it Sounds!

Unfortunately, there aren’t many STEM activities that are appropriate for the entire family – or are there? Is it really possible to enjoy one STEM activity for every age level?