Teaching a Growth Mindset in Your Homeschool

What if there were a magic bullet that would improve your child’s attitude about school AND increase their academic performance? Would you be interested?

Yup, I thought so!

All parents want to inspire greatness in their kids. We want our kids to love learning and to confidently overcome the difficulties that they will surely encounter throughout their lifetime of learning. 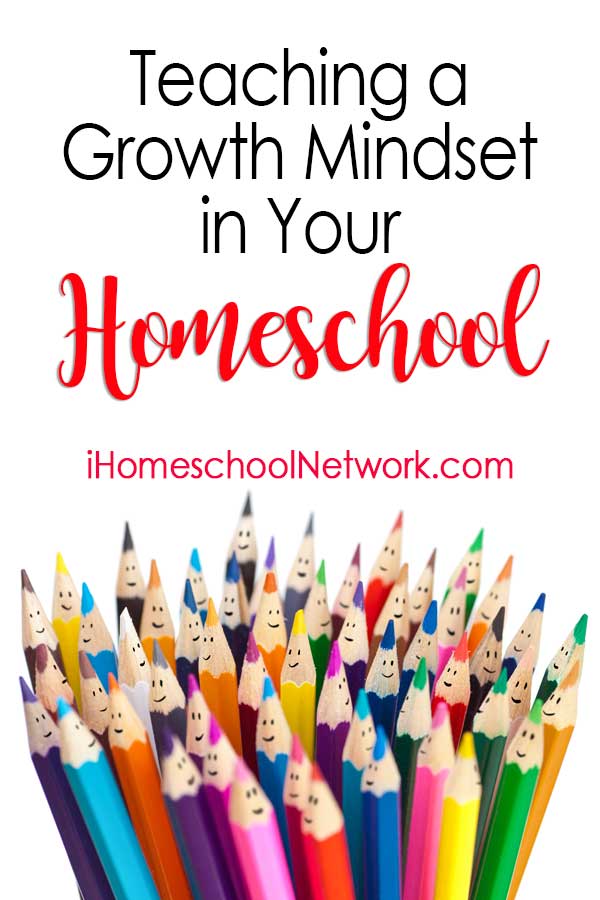 As the long time homeschooling mom of a houseful of kids who struggle to learn due to dyslexia and ADHD, I have been on the lookout for such a remedy.

Interestingly, this amazing thing is not found in a curriculum or a homeschool method at all.

It has to do with how we encourage our kids as they learn.

Let me give you an example.

Your child is struggling with learning something, followed by complaining, dawdling, or giving up completely. So Mom (or Dad) steps in and says, ‘Hey buddy. It’s okay. You haven’t learned that – YET.’ Your child looks at you bewildered by your statement and tries again. As they are trying, you are quick to notice their effort and perseverance. “I like how you are persevering” you may say, or “I like how you are using your strategies”.

These mindsets are referred to as growth and fixed mindsets.

The day I learned about fixed and growth mindsets was the day that I experienced a huge shift in the way that I thought about teaching but, more importantly, my kids have benefited massively from the simple shift in how I talk about their learning.

The term Growth Mindset was coined by Stanford researcher Dr. Carol Dweck to refer to a person’s attitude about learning. After researching learned helplessness in lab rats, Dr. Dweck began to apply what she had learned to the same sorts of attitudes in people.

Kids were given a fairly simple non-verbal IQ test. The 3 groups received a different response towards their work:

Praise for their process: The second group was praised for their effort. “You did a great job! You must have tried very hard.”

The control group: This group received a neutral response. “You did a great job!”

It was concluded that both groups of kids were sensitive to what the researchers valued – effort or intelligence – and were motivated to continue to score well in those areas.

People with a fixed mindset:

People with a growth mindset:

How to Promote a Growth Mindset

Praise the process. We tend to think that telling our kids how smart they are will increase their confidence. While this may give a brief boost, research shows that praising effort rather than outcome results in a growth mindset. Here are some ideas for phrasing your praise to focus on the process:

Do you have a child that thinks they aren’t smart or who thinks they can’t learn? Try to figure out what they do understand and what strategies they could use. Great teachers believe in the growth of talent and intelligence in their students and will take the time to learn how their students (or kids) learn.

Developing a growth mindset takes time. With consistent modeling and appropriate encouragement, you will begin to see your kids being less intimidated by their struggles and becoming more persistent.

Marianne Sunderland is a homeschooling mother of eight unique children ages 6 to 25, including adventurous and homeschooled sailors, Zac and Abby Sunderland, known for their world-record setting around the world sailing campaigns. Because 7 of her 8 children are dyslexic, Marianne is a dedicated dyslexia advocate with a passion for educating and encouraging families, not only to understand dyslexia, but also to discover and nurture their children’s God-given gifts and talents, in and outside of the classroom.

I mapped out an amazing line-up of unit studies, my son was enjoying school, and all was well. Then we discovered interest-led education.

END_OF_DOCUMENT_TOKEN_TO_BE_REPLACED

The fears lurk on both sides of the public school vs homeschool debate. Resources to help you instill unique family values in your homeschool.

END_OF_DOCUMENT_TOKEN_TO_BE_REPLACED

Mix up your homeschool lesson plan by using an Unconventional Holidays calendar this year! Kids will love the fun environment these holidays create!

END_OF_DOCUMENT_TOKEN_TO_BE_REPLACED

Marianne Sunderland is a homeschooling mother of eight unique children ages 6 to 25, including adventurous and homeschooled sailors, Zac and Abby Sunderland, known for their world-record setting around the world sailing campaigns. Because 7 of her 8 children are dyslexic, Marianne is a dedicated dyslexia advocate with a passion for educating and encouraging families, not only to understand dyslexia, but also to discover and nurture their children’s God-given gifts and talents, in and outside of the classroom.